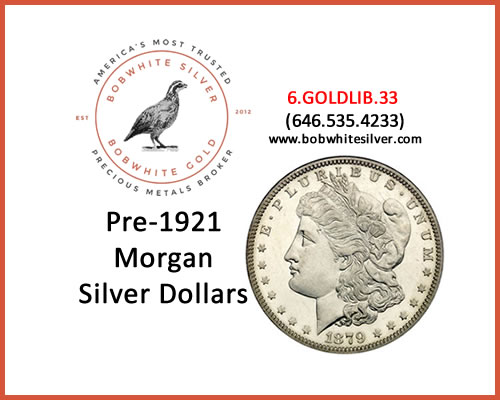 The Morgan silver dollar has a composition of 90% and 10% copper, weighs 26.73 grams and contains just over ¾ of a troy ounce of pure silver (0.77344 oz). The first coins were struck at the Philadelphia Mint in March of 1878. The Philadelphia coins bear no mint mark, while subsequent coins featured mint marks of CC (Carson City), S (San Francisco), O (New Orleans), D (Denver). In general terms, Carson City coins had lower mintage figures and carry a higher premium value among collectors.

US Mint Director Henry Linderman commissioned Chief Engraver William Barber and one of his assistants, George T. Morgan, a young British engraver, to prepare pattern dollars in November of 1877. The best design was to be used on the new silver dollar being proposed by the Bland-Allison Act, which ultimately passed into law in February of 1878.

Linderman had hired Morgan in 1876, entrusting him with new coin designs as a response to his dissatisfaction with Barber and his son, Charles. At that time, no US Silver Dollars had been minted since 1873 and no new coins were in planning stages. With the Bland-Allison Act making a new dollar appear inevitable, Linderman ordered that a head of Liberty would replace the full-figure depiction of the previous silver dollar, the Seated Liberty.

Morgan’s obverse features a left-facing portrait of Miss Liberty, modeled after Philadelphia school teacher Anna Willess Williams, with Liberty emblazoned across her crown, the words E PLURIBUS UNUM across the top of the coin, the date at the bottom. The obverse also features 13 stars and Morgans initial M at the truncation of the neck.

The reverse depicts an eagle clasping arrows and an olive branch, with the words UNITED STATES OF AMERICA – ONE DOLLAR around the rim and the words In God We Trust above the eagle’s head. Morgan’s initial M also appears on the reverse, on the ribbon’s left loop. Mintmarks are found below the wreath on the reverse.

Pre-21 Morgan dollar – further reading:
The Morgan 90% Silver Dollar has been a favorite among collectors and investors for over well 100 years. For more detailed information on the classic Pre-21 Morgan Silver Dollars, please refer to this informative article from Wikipedia. 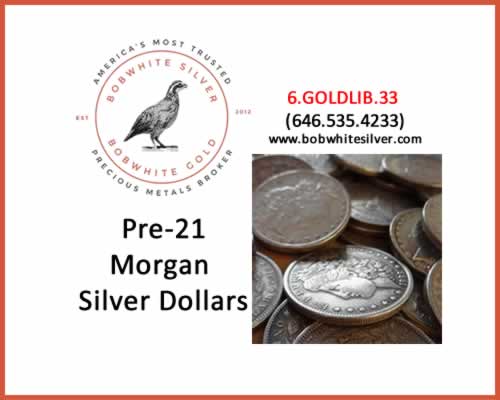 Why buy from us?

At bobwhite silver bobwhite gold (BSBG), I bring over $1.6 billion in business experience to the trading desk. If you require a broker who, in addition to offering great prices and quick delivery on items like pre-21 Morgan dollars, provides you with that personal touch, offering patience, transparency and integrity, bobwhite silver is definitely a choice to consider.

If you have any questions about pre-21 Morgan dollars, or you’re ready to make a purchase, please call me at 6.GOLDLIB.33 (646.535.4233) seven days a week! No ever-changing bunch of guys in cubicles, no, “please listen as our menu options have recently changed”, no “dial 9 for a company directory”, just me, Joel (bobwhite is a bird).